TV/Stream: The tie will be streamed live on the Iron’s iFollow channel and match passes are available to buy, priced £10, HERE.

With a number of players not due back into training until Saturday, it has been less than ideal preparation for Cox who admits he is likely to be forced into giving minutes to players who are not fully fit and limp through two cup games in three days.

With the country now in the midst of a National lockdown and behind closed doors fixtures increasingly difficult to arrange, it may be the only way to get them up to speed on the job ahead of a busy schedule this side of Christmas.

There were definite signs of improvement last time out as a depleted Iron side, who lost two players to COVID-19 on the coach journey to Devon, fell to a battling 3-1 reverse to Exeter.

With eight players testing positive and ten forced into self isolation following the unnecessary trip, match sharpness could understandably be lacking for the visit of the Moors, but there were positives to take from the Iron’s sixth straight defeat in all competitions.

The dogged performance in the face of adversity gave hope that the Iron’s fortunes may slowly start to improve, but Sunday’s clash may come too soon against a match sharp Solihull, who are currently 7th in the National League following another decent start to the season.

Whilst an FA Cup run would certainly be a much needed boost to the club’s coffers, it’s difficult to get excited about Sunday. With the first round of fixtures set to be played during lockdown and the 12 noon start, the FA Cup seems to have lost even more of it’s magic this season.

The tie has banana skin written all over it and with the Iron in disarray Jimmy Shan’s men, who sit just eight places below them in the football pyramid, will be eyeing a first round upset.

Experienced duo Kevin Van Veen and Junior Brown could be set to return to the side despite the fact neither are at full fitness. Van Veen is well ahead of schedule on his return from a serious knee injury and Cox has admitted he may be forced to risk his talisman against the Moors in an attempt to get him fit.

Whilst the Dutchman’s return is undoubtedly a huge boost, losing him for a second spell would put a serious dent in the Iron’s survival hopes and Cox must ease him back into action carefully after a seven month lay off.

Cox told Radio Humberside: “Kev and Junior need to get some fitness. We were hoping to get some fitness in before they can play, but they may have to play minutes for us in the FA Cup on Sunday. It’s not ideal, but we have to put a team out that can try and win the game”.

Youngsters Charlie Barks and Finley Shrimpton have returned to the club following their loans at Frickley Athletic, whilst Harry Jessop has had his loan at Pickering Town cut short after an impressive spell and all three players come into contention to face the Moors.

In the opposition dugout

Jimmy Shan joined the coaching staff of West Bromwich Albion in 2006 and worked with every age group from under 7s up to the first-team in a remarkable 13-year spell.

The well regarded coach was appointed caretaker manager upon the sacking of Darren Moore in 2019 and oversaw and end to the 2019 campaign in which they fell just short in the Championship play-offs despite a good run of form.

Shan left upon the arrival of Slaven Bilic, despite the Croatian’s best attempts to convince him to stay. He more recently spent two months in interim charge at Kidderminster, before taking charge of ambitious Solihull in February 2020.

Midfielder Joe Sbarra netted two in the final FA Cup qualifying round as Solihull Moors romped to a 4-0 victory over Wrexham. The former West Brom youth product has a decent CV and has played most of his football in the Football League including 18 appearances at Championship level with Burton Albion.

Veteran striker Adam Rooney, who was prolific in the National League for Graham Alexander’s Salford side, also scored in the final qualifying round but did not feature in Solihull’s 3-1 defeat to Maidenhead last week. 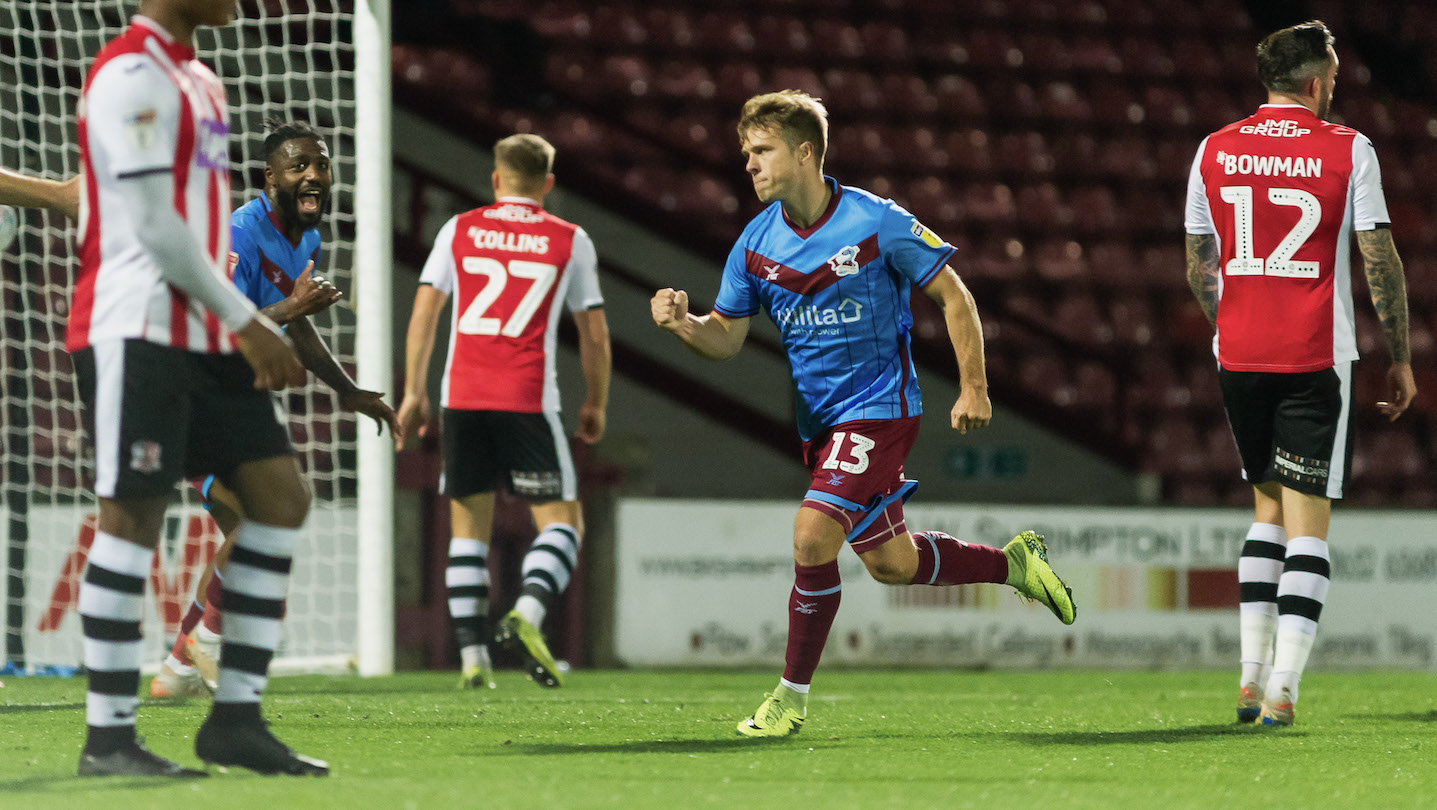 The Moors have a number of familiar faces within their ranks. Jamie Ward, fondly remembered for a perfectly weighted through ball to Kevin Van Veen at Blundell Park last December and 2008/09 promotion winner Krystian Pearce could both line up against their former club on Sunday. Pearce was a free agent following his release from Mansfield and adds experience, whilst Callum Howe, who has forged a decent career at National League since his release from Scunthorpe in 2015, is usually a mainstay in the Moors’ defence. Howe, who is the club’s vice captain, has been ruled out of a return to Glanford Park with a serious knee injury.

The man in the middle

The referee for the tie is James Bell. He is in his first season as Football League official and has taken charge of 8 matches this season, dishing out 23 yellows and 3 red cards in the process.

Sunday’s FA Cup clash is the first ever meeting between the two sides.

Despite their recent poor form, the bookies have made Scunthorpe even money to win in 90 minutes. Solihull are best priced 3/1 and the draw is currently 13/5.

Solihull are a decent non league outfit and match sharpness might just give them the edge. Scunthorpe 1-2 Solihull Moors.

PODCAST: Take the bit between your Keith