Previous Next
Sponsored by

Scunthorpe fan Bradley Mell is feeling positive about the Iron’s appointment of Stuart McCall, despite a poor display in his first game in charge at Accrington Stanley.

With over a week in charge and now with a game under his belt I was tasked with looking at everything that’s happened at the club since Nick Daws was sacked and see, at this early stage, what the first impressions have been and what we can predict about Stuart McCall.

Since the announcement of McCall we’ve seen a noticeable change in the mood of supporters around Glanford Park. Coming off the back of a poor preseason and awful start to the campaign McCall’s arrival brought with it a renewed sense of hope.

The possibility of an improved squad, a new style of football, someone who would not only get us back on track but could also propel us forward too. Combine this with the fact that most new managers tend to get off to a flying start, we only have to think of the first half at Oxford when Daws took over from Alexander, I was quite optimistic that we would see a noticeable improvement; to come out the gate running and make our mark. Well, as anyone who went to Accrington Stanley will tell you, it didn’t quite work out that way.

There I am, standing behind the goal on the Coppice Terrace knowing full well that I have this piece to write and I’m thinking, what on earth am I going to be able to say about this? In the first half it really didn’t seem like there had been any change at all, the defending was still all over the place, there was little urgency to any of the play, countless five yard passes were going astray and it was still taking roughly two and a half years to get the ball from one side of the pitch to the other.

The introduction of Colclough in the second half saw an improvement with the style becoming a little more attacking. It was better but I wouldn’t go so far as to say it was good. All in all the game was rather forgettable. Not exactly the most useful thing for a piece on what we can learn about McCall then.

However, I would argue that this game and more importantly the pre and post-match content does actually yield more information than you might expect at first glance. We should start by looking at what McCall has been directly responsible for, specifically the loan signing of Jak Alnwick.

With Rory Watson suffering a lengthy injury, and Matt Gilks out until January the new manager’s first action was always going to be that of bringing in a new keeper, and from what I saw of Alnwick I’m fairly confident this will prove to be a strong first action. The pair have worked together previously obviously know each other well, which will go a long way, but more than this I do think Alnwick might be just what we need.

The distribution was reasonably good, he pulled off an excellent save in the first half but most important of all he is a commanding presence. With us being so close to the pitch at Accrington we could hear everything that was being said, and Alnwick is extremely vocal. Including at one point, in his own words and echoing the sentiments of the fans at the time, he could be heard shouting at the defenders to ‘f*****g switch on.’ I think he’ll bring some much needed stability and organisation to the back in the coming months and where I wasn’t before, I am now quite confident in our keeper situation.

McCall’s demeanour in the dugout is also something to make note off. Throughout the first half I would often find myself looking in the direction of the manager, partly out of intrigue, partly out of boredom. Where Daws was criticised for seeming passive, McCall’s style is anything but. After one moment of haphazard defending Andy Dawson was brought forward and McCall could be seen to indicate that he wanted to change style and presumably was asking Dawson if he felt it would suit certain players.

Naturally McCall won’t know the best way forward for this squad just yet and the fact that he was willing to call upon Dawson, who obviously knows this team well, isn’t something to be overlooked. There isn’t stubbornness there, and the fact that McCall is willing to ask for and take advice is extremely positive. Whilst on the subject of this it is important to realise that, just as this is our first time seeing the new manager’s intentions, this is his first time seeing this squad in action.

Training is one thing but a competitive fixture is something different entirely. It was particularly welcoming to see that McCall, especially in the first half, looked as frustrated as we did. He’d be forgiven for thinking what have I taken on? But in response to this there was adaptation and after a number of previous managers that have been stuck in their way formation wise this will no doubt come as a relief.

The removal of Thomas for Colclough, and on half time not at 80 minutes, meant the formation shifted into a much more recognisable 4-4-2 structure as it was clear that the attempted diamond of the first half wasn’t working. This change allowed for the width to be used a bit more and the play became more attacking as a result, though as previously mentioned it wasn’t entirely effective. But I am very encouraged by the fact that McCall is willing to adapt so drastically and make changes when they are called for. 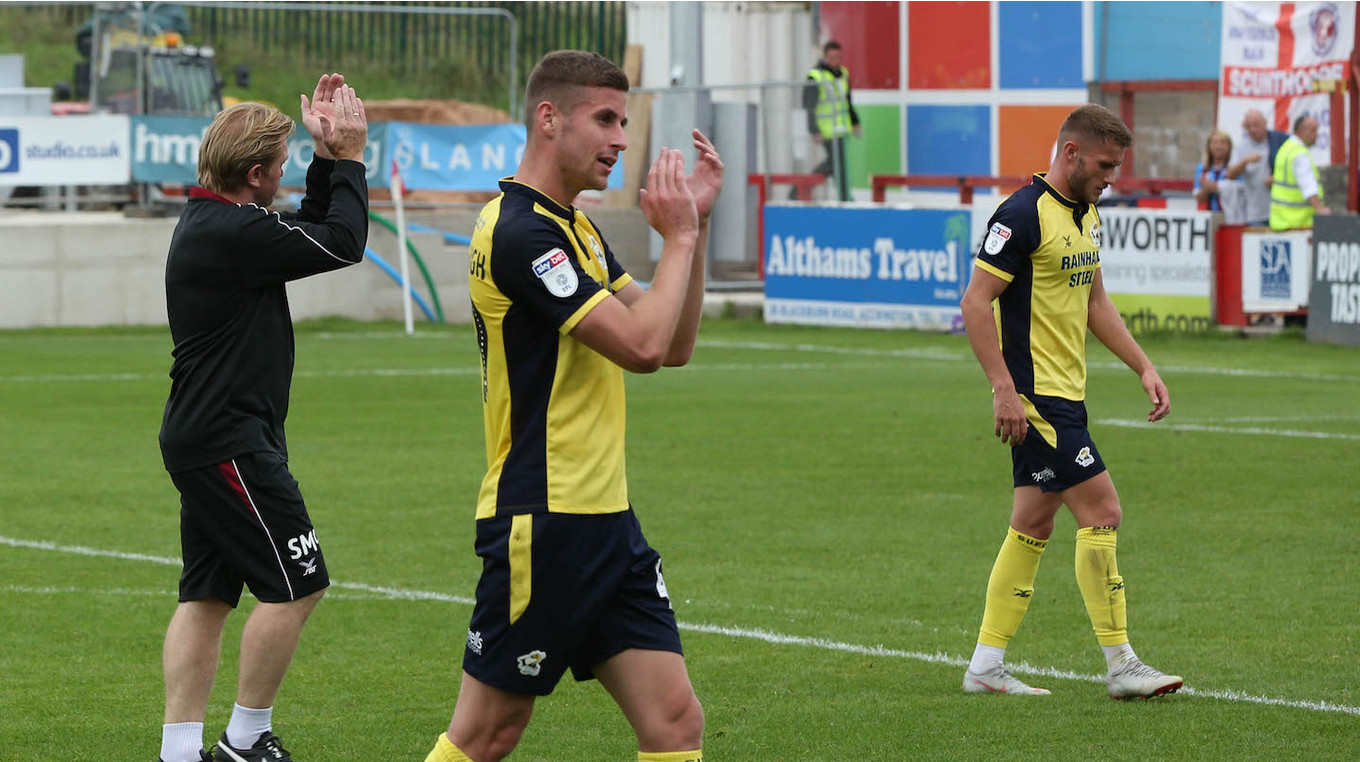 The attacking style is something I’m sure that we will see more of as the weeks go by, this seems very much to be the way that McCall wants to play. But it wasn’t just the second half hints that bring us to this conclusion, the pre match warm up also alludes to this. It may seem an odd thing to bring up but when you’ve been watching the same warm up for nearly four years it strikes you when there are changes.

I’d like to get a better look at this next week but from what we saw on Saturday there are a number of things that will help the team. A smaller, more intensive drill in which players in close proximity to each other would pass the ball out, suggests a style where we play out on the ground and look to break forward, not dissimilar to the way Bradford played under McCall.

There were also simple changes to the shooting practice. Rather than being right in front of the players Kenny Black would deliver balls in from various side angles offering a much more match realistic encounter. We also saw the group of subs participate in a rondo drill, we can assume the first team also worked on this in training and ultimately this sort of drill will help us no end in possession if the players can adapt to it.

Just as McCall adapted in the match this game will have given him plenty to adapt going forward, and judging by his post-match interview for Radio Humberside this is something he isn’t shying away from. Admitting that we were lucky to come away with a point McCall gave a frank but refreshingly honest take on the match.

He states that we lacked ‘a little bit of leadership, a little bit of organisation’ and realistically ‘we should have been going in there [at half time] 2 or 3-0 down.’ However, from this interview we can also interpret a lot about his personality and the philosophy he adopts. By saying ‘we’re not here to criticise players. As a coach and a manager we’re here to help them and guide them.’ This naturally suggests a positive atmosphere and one that will likely bring results.

At a time when the confidence of some of the squad is at an all-time low this may be just the sort of attitude needed to lift them and get them playing back at their best. It all points to McCall being a strong man manager. The interview is probably best summed up with his assertion that ‘I like my teams to play well and we didn’t play well.’ It suggests a desire, not only for results, but for performances to be admired, something that will no doubt be welcomed at Glanford Park.

Overall, despite a rather poor game, my overall first impression of Stuart McCall is definitely positive. I believe we have gained a manager that wants to play good, attacking football and one who is willing to adapt in order to achieve this. Both tactically and in terms of man management he seems an ideal candidate.

He strikes me as someone who isn’t afraid to take risks but who also isn’t stubborn enough to leave it as it is when it clearly isn’t working. I think there’s a reason that he is still so well regarded amongst the Bradford fans and even at this early stage I’m happy enough to believe that their loss is most definitely our gain.

Will Montag is an English Literature graduate of Manchester Metropolitan University. He is an avid reader of fiction, and a lifelong Iron fan. Will enjoys various outdoor pursuits in his spare time.

Find the latest bookmaker offers with our partner Match-bonuscode

Your password reset link appears to be invalid or expired.